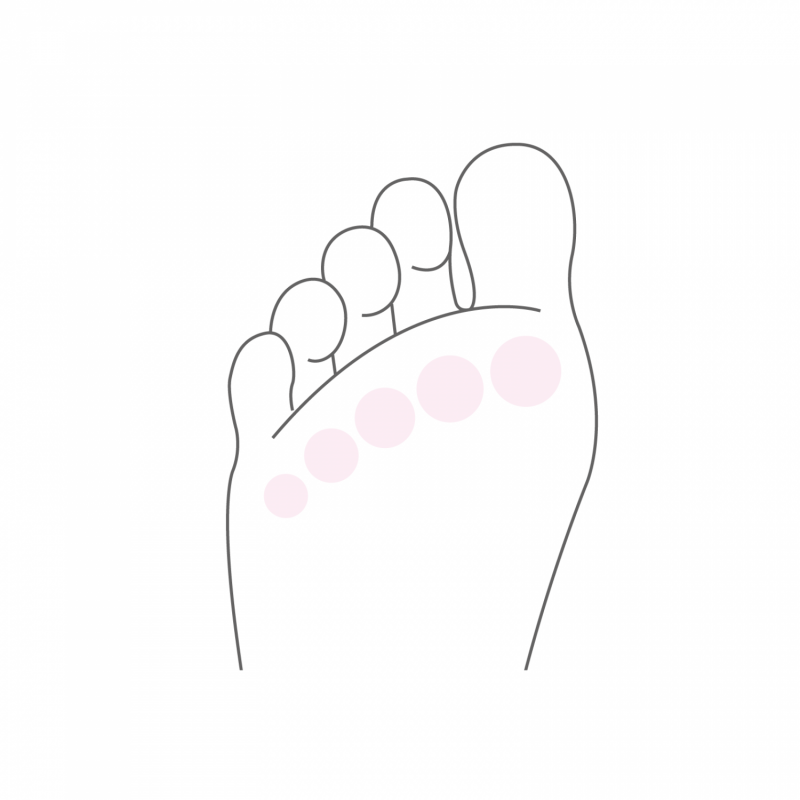 The term "metatarsalgia" means pain felt in the heads of the Metatarsals, on the plantar surface of the foot at the base of the toes. There are many causes that can cause metatarsalgia, but they are always related to constant pressure on the forefoot area. These pains are often associated with other deformities of the forefoot such as hallux valgus, hallux rigidus or deformities of toes. This is called transfer metatarsalgia. They are the result of higher pressure in the metatarsal heads which also results in increased hyperkeratosis in the affected area.

The morphology of the foot plays a determining role in the development of metatarsalgia. Thus the Greek foot, where the 2nd toe is longer, is more prone to developing an overload of the head of the 2nd metatarsus in particular. A marked shortening of one of the calf muscles (the gastrocnemius) can also increase pressure on the forefoot when walking. A rapid change in walking habits or a sudden increase in certain physical activities can also lead to an overload of the forefoot and cause metatarsalgia. Unlike Morton's neuroma where the pains are localized between the metatarsal heads, in metatarsalgia the pains are located exactly under the heads of the metatarsals.

A particular type of metatarsalgia is the pain located under the head of the first metatarsus in the area of ​​the Sesamoids. These two small bones are located in a ligament structure inside the joint capsule. They can be subjected to an overload, which will cause inflammation of one or both bones, this is called sesamoiditis. In rare cases, one can even witness a fracture of one of these bones, which can lead to bone fragmentation and vascularization disorders (necrosis) and also be the cause of pain when walking. The overload of sesamoid bones is also often associated with a hollow foot morphology.

In addition to the patient's history and a precise clinical examination, a conventional X-ray of the foot in charge and other examinations such as magnetic resonance imaging (MRI) allow the diagnosis to be made.

If conservative treatment fails and in certain specific anatomical situations, surgical treatment may be indicated. The intervention aims above all to restore the anatomical alignment of the metatarsal heads which could have been modified. Osteotomies are then performed at the metatarsals (diaphyseal osteotomies), aimed at restoring the length of the metatarsals without disturbing the mobility of the toe joints.

The intervention lasts between 30 and 45 minutes depending on the number of metatarsals to correct and can be performed under general or spinal anesthesia. It can be combined with local anesthesia of one of the main nerves of the foot (popliteal block), which significantly reduces post-operative pain. It takes one to two nights of hospitalization. Walking is done immediately from the first post-operative day under full load in a shoe with a rigid sole to be worn for 6 weeks. The ablation of the son takes place 2 weeks after the intervention and a clinical and radiological control is carried out 6 weeks after the operation.

Resumption of walking in conventional shoes is done from the 7th post-operative week. At this time a physiotherapy treatment aimed at reducing the swelling of the foot and improving its function is put in place. Resumption of activities such as swimming, cycling or moderate walking is possible as early as the 7th post-operative week. More restrictive activities on the foot such as running or longer hikes can be considered from the 4th month after the intervention. The forefoot will continue to refine and soften for up to six months post-operatively and gradually return to full function. A clinical and radiological check at 1 year post-operative allows a final assessment and to end the treatment.