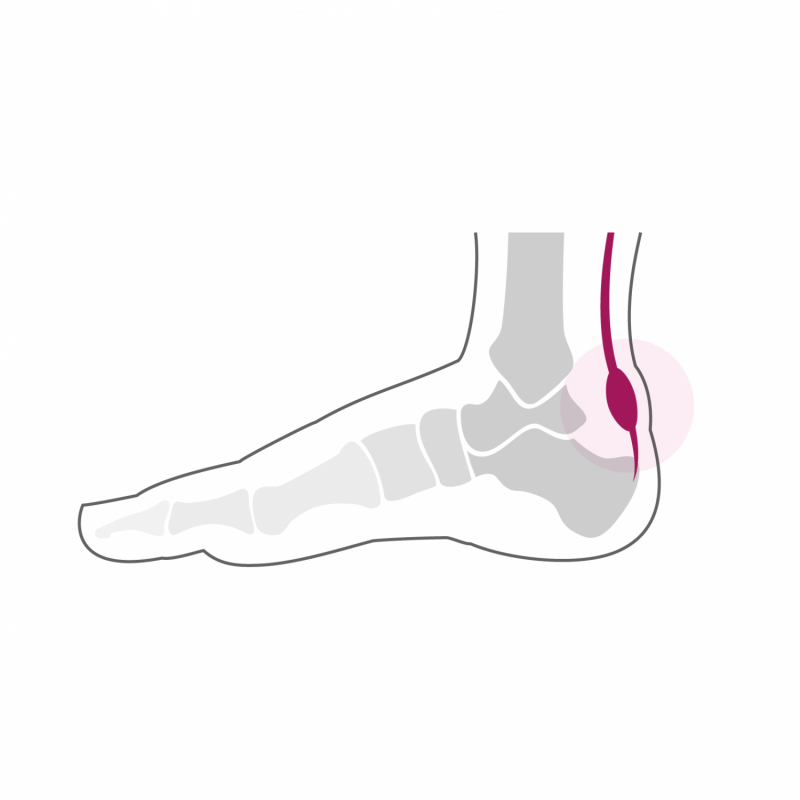 Its treatment can be conservative or surgical. Healing the Achilles tendon is a slow process and it often takes up to a year for the tendon to regain its full function. Despite adequate initial treatment, it is not uncommon to experience residual pain after rupture of the Achilles tendon and functional discomfort, which manifests as increased fatigue and loss of strength. This situation is due to a healing of the tendon in a lying position, this is called Achilles tendon insufficiency or chronic tearing.

The treatment is initially conservative and consists of a program to strengthen the calf muscles in the form of physiotherapy. During this phase, we rather seek to obtain a firming of the tendon and we must avoid performing stretching exercises so as not to lengthen it even more. An adaptation of the loads and the sports activities is also necessary and a heel pad of approximately 1 cm is placed in the shoes, again to reduce the tension on the Achilles tendon when walking. A phase of at least 6 months of conservative treatment is generally granted. If despite this treatment the tendon remains insufficient and the symptoms are sufficiently troublesome, a surgical solution can be proposed.

The operation lasts between 60 and 90 minutes and can be performed under general or spinal anesthesia. It can be combined with local anesthesia of one of the main nerves of the foot (popliteal block), which significantly reduces post-operative pain. It takes two nights of hospitalization. Walking is done immediately from the first post-operative day in full discharge of the foot operated using crutches in a removable plastered boot. This total discharge must be observed during the first two weeks. The removal of stitches and the making of a new removable plastered boot take place 2 weeks after the intervention. From this moment, a partial load of 15 to 20 kg on the operated foot is allowed, this for 4 additional weeks. A clinical check-up is carried out 6 weeks after the operation.

At this stage, the tendon is sufficiently resistant and allows a progressive increase in the load over a period of two to three weeks until the total load. From the 7th week, a physiotherapy treatment aimed at reducing the swelling of the foot and improving its function is implemented. Resumption of activities such as swimming, cycling or moderate walking is possible as early as the 8th post-operative week. More demanding activities on the foot such as longer hikes or running can be considered from the 7th month after the intervention. Stop and go sports with repeated lateral movements and jumps are only resumed after one year. The foot will continue to refine and heal until one year post-operatively and gradually regain its full function.