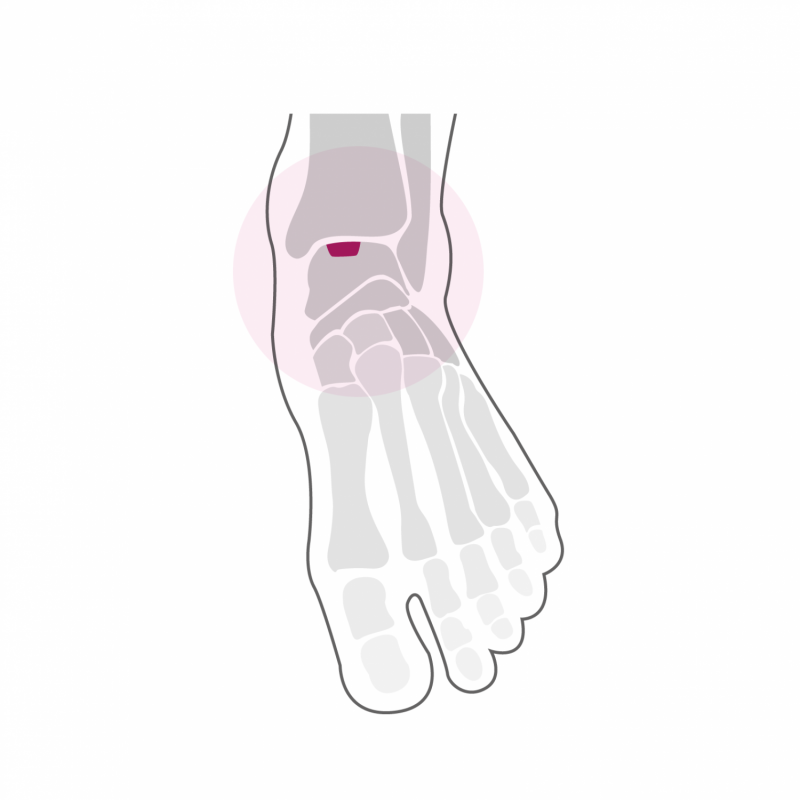 An osteochondral lesion is damage to the cartilage and the area where the cartilage attaches to the bone. This lesion is most often localized on the articular surface of the talus and is most often due to trauma to the ankle such as a sprain or fracture in the malleoli. Osteochondral injury can also occur spontaneously without apparent trauma. This lesion tends to progress over time and can cause detachment of the affected area from the joint surface and lead to the development of osteoarthritis. This lesion causes joint pain on exertion, pain sometimes accompanied by a feeling of blockage and swelling of the ankle as well as a feeling of instability.

The diagnosis is made by clinical examination and is confirmed by a standard X-ray and an MRI of the ankle. An arthro-CT examination of the ankle (CT examination with intra-articular contrast product) makes it possible to clarify the diagnosis and measure joint damage. If there are signs of instability in the area of ​​the osteochondral lesion, surgical treatment is indicated to stabilize the lesion. The intervention is associated with an arthroscopy of the ankle aimed at taking stock of the state of the cartilage and, if necessary, treating a lesion by debridement (abrasion of the injured area) and by carrying out micro-fractures in order to stimulate the regeneration of replacement cartilage (fibrous cartilage). The damaged area below the cartilage is punctured retrograde so as to be cleaned and is replaced by cancellous bone taken from the tibia to improve vascularity.

The operation lasts between 60 and 90 minutes and can be performed under general or spinal anesthesia. It can be combined with local anesthesia of one of the main nerves of the foot (popliteal block), which significantly reduces post-operative pain. It takes two nights of hospitalization. Walking is done immediately from the first post-operative day in full discharge of the foot operated using canes in a removable plastered boot. This total discharge must be observed during the first two weeks. The removal of stitches and the making of a new removable plastered boot take place 2 weeks after the intervention. From this moment, a partial load of 15 to 20 kg on the operated foot is allowed for 4 additional weeks. A clinical and radiological check-up is carried out 6 weeks after the operation.

At this stage, bone healing is sufficient and allows a gradual increase in the load over a period of two to three weeks up to the total load. From the 7th week, a physiotherapy treatment aimed at reducing the swelling of the foot and improving its function is implemented. Resumption of activities such as swimming, cycling or moderate walking is possible as early as the 8th post-operative week. More demanding activities on the foot such as longer hikes or running can be considered from the 7th month after the intervention. Stop and go sports with repeated lateral movements and jumps are only resumed after one year. The foot will continue to refine and heal until one year post-operatively and gradually regain its full function.