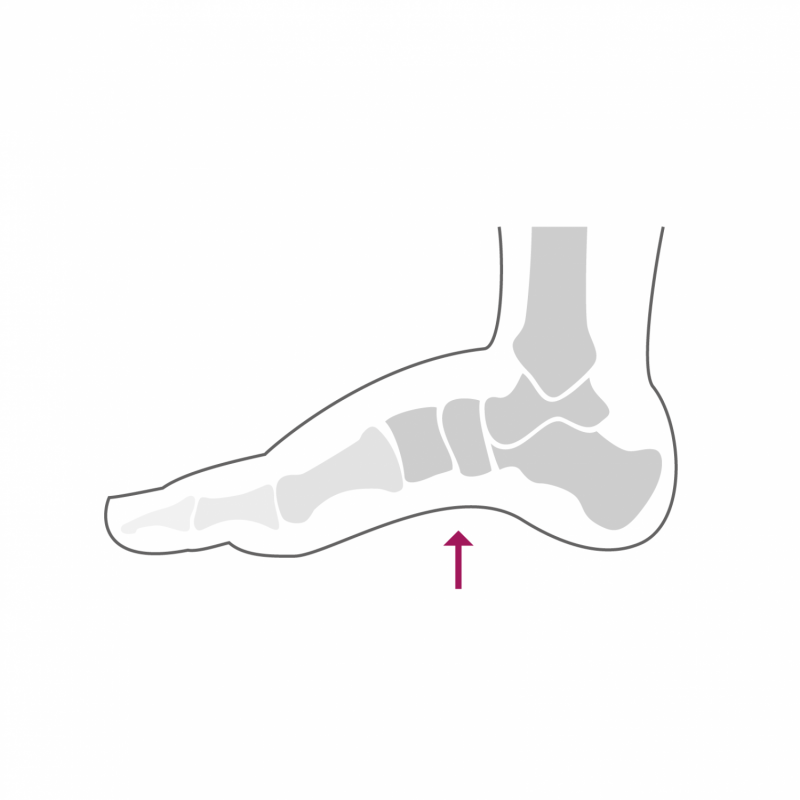 The hollow foot, like the flat foot, is an anatomical variation of the so-called "normal" foot. The hollow foot is characterized by a very marked arch on the inner side of the foot, as well as by a lowering of the first metatarsus. It is accompanied by a more or less significant rocking in the hindfoot varus ("O" hindfoot) and adduction of the midfoot (foot deviating inwards). The causes of the hollow foot are multiple. Besides a hereditary or genetic origin characterizing the morphology of this foot, a neurological problem must be suspected and investigated. It can also be a sequel to a congenital clubfoot. The hollow foot is well compensated for a long time, but the forces exerted on the foot over the years cause an overload of certain ligament and tendon structures, which leads to decompensation of the foot and the appearance of pain. The first symptoms appear during prolonged exertion and are most often due to inflammation of the peroneal tendons on the lateral edge of the ankle. Insufficiency of the ankle's external ligaments can also develop, causing a feeling of instability in the ankle and repeated sprains. If the deformity worsens, osteoarthritis can settle in the joints of the hindfoot and ankle, further accentuating the pain and functional discomfort. The hollow foot is also often accompanied by deformities of hammer toes due to an imbalance between the flexor tendons and the extensor tendons of the toes.

The clinical examination allows the diagnosis to be made. Other additional examinations such as standard radiographs or an MRI are often necessary to clarify the state of certain anatomical structures. If an associated neurological problem is suspected, an assessment with a neurologist is advised. In the case of a hollow foot, it is important to consult a specialist as soon as the first symptoms appear.

At this stage, a conservative treatment can be implemented, most often in the form of adapted plantar supports and exercises to strengthen the peroneal muscles. These measures then make it possible to stabilize the situation and avoid a progression of symptoms and deformation.

At a more advanced stage of the deformity, surgical correction is often necessary in order to restore the anatomy of the hindfoot and to correct any deformities of the toes. The intervention is a combination of several gestures (corrective osteotomy of the calcaneus and the 1st metatarsus, lateral ligament reconstruction and possibly a revision of the peroneal tendons). In the presence of symptomatic osteoarthritis of the hindfoot or ankle joints, arthrodesis, possibly combined with the fitting of a total ankle prosthesis, is often necessary and is used to treat symptoms.

The intervention can last up to two hours depending on the gestures to be performed and can be performed under general or spinal anesthesia. It can be combined with local anesthesia of one of the main nerves of the foot (popliteal block), which significantly reduces post-operative pain. It takes two to three nights of hospitalization. Walking is done immediately from the first post-operative day in full discharge of the foot operated using canes in a removable plastered boot. This total discharge must be observed during the first two weeks. The removal of stitches and the making of a new removable plastered boot take place 2 weeks after the intervention. From this moment, a partial load of 15 to 20 kg on the operated foot is allowed, this for 4 additional weeks. A clinical and radiological check-up is carried out 6 weeks after the operation.

In case of sufficient bone healing, a gradual increase in the load on the foot is done over a period of two to three weeks until the total load. From the 7th week, a physiotherapy treatment aimed at reducing the swelling of the foot and improving its function is implemented. Resumption of activities such as swimming, cycling or moderate walking is possible from the 10th post-operative week. More restrictive activities on the foot such as longer hikes can be considered from the 7th month after the intervention. Activities such as running or other stop and go sports are not recommended after this type of intervention. The foot will continue to refine and heal until one year post-operatively and gradually regain its full function. Wearing a suitable plantar support is recommended later to maintain the correction.