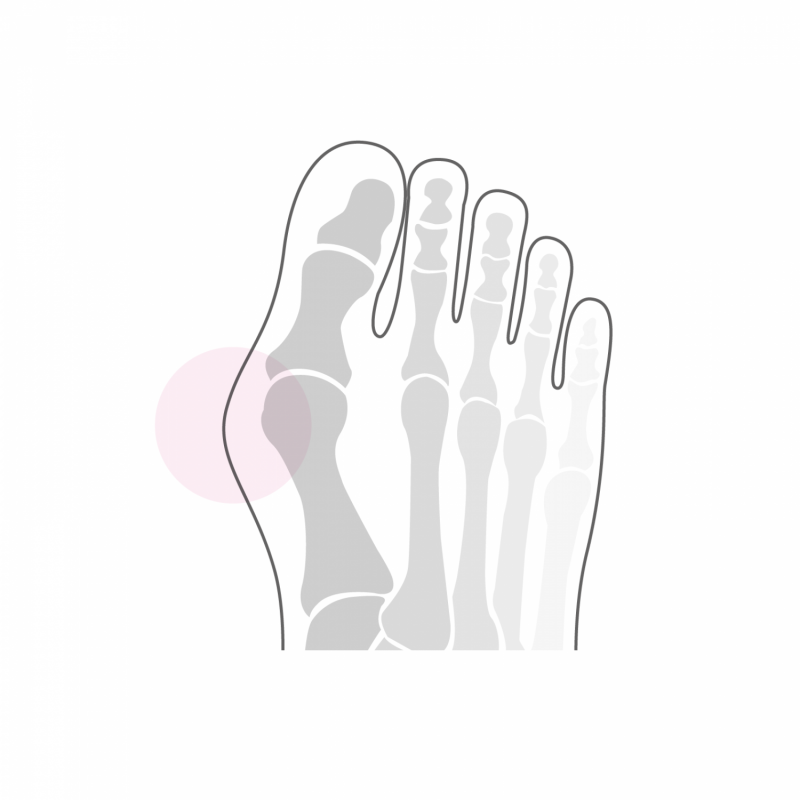 The hallux Valgus is a deformation of the forefoot located at the joint of the big toe (hallux means "big toe" in Latin), in which the big toe will gradually deviate towards the small toes creating a more pronounced angle at the joint. This deformation concerns around 7% of the population and its origin is multiple. The main cause of the deformation is the shape of the head of the first metatarsus (foot bone at the base of the big toe), where the articular surface shows an oblique orientation rather than perpendicular to the axis of the metatarsus. This is a genetic and/or a hereditary characteristic of the deformation. Other factors such as; the morphology of the foot and the loosening of certain ligament structures will also influence the deformation and cause it to change over time. If at the beginning the deformation remains asymptomatic for a long time, its progression increases the pressure on the hallux area, which causes the first pain. These are increased by wearing unsuitable shoes or by certain physical activities. Over time, the unfavorable position of the hallux can cause associated deformation of the small toes, causing other pressure problems, discomfort and pain in this area as well. At an advanced stage, arthritis can even appear in the joint of the big toe.

A clinical and radiological examination makes it possible to assess the extent of the deformation and to clarify the diagnosis. The treatment is first of all conservative and consists of the adaptation of the shoes, the installation of a plantar support, especially in the case of associated flat feet, or the use of orthoses (auxiliary means aimed at stabilizing the position of the big toe). If discomfort and pain persist despite these measures, surgical correction may be considered.

Surgical treatment for hallux valgus aims to restore the anatomy of the forefoot. It is done through a correction of the bone of the first metatarsus (ReveL osteotomy) and a possible correction in the first phalanx of the big toe (Akin osteotomy). This correction must be as precise and as stable as possible in order to obtain a final and lasting anatomical situation. We practice an open technique using a small incision on the inner edge of the big toe joint and the osteotomy is fixed by two titanium screws which are buried in the bone, which does not require no withdrawal thereafter. The scar is practically no longer visible over time and does not bother in the shoes.

The operation lasts between 30 and 40 minutes and is done under general or spinal anesthesia. It can be combined with local anesthesia of one of the main nerves of the foot (popliteal block), which significantly reduces post-operative pain. It takes one to two nights of hospitalization. Walking is done immediately from the first post-operative day under full load in a shoe with a rigid sole to be worn for 6 weeks. The stitches are removed 2 weeks after the intervention and a clinical and radiological control is carried out 6 weeks after the operation.

Resumption of walking in conventional shoes is done from the 7th post-operative week. At that time, physiotherapy treatment aimed at reducing swelling in the foot and improving the function of the joint of the big toe is put in place. Resumption of activities such as swimming, cycling or moderate walking is possible from the 7th week post-operative. More restrictive activities on the foot such as running or longer hikes can be considered from the 4th month after the intervention. The forefoot will continue to refine and soften for up to six months post-operatively and gradually return to full function. A clinical and radiological check at 1 year post-operative allows a final assessment and to end the treatment.