Osteoarthritis of the mid-foot and hind-foot 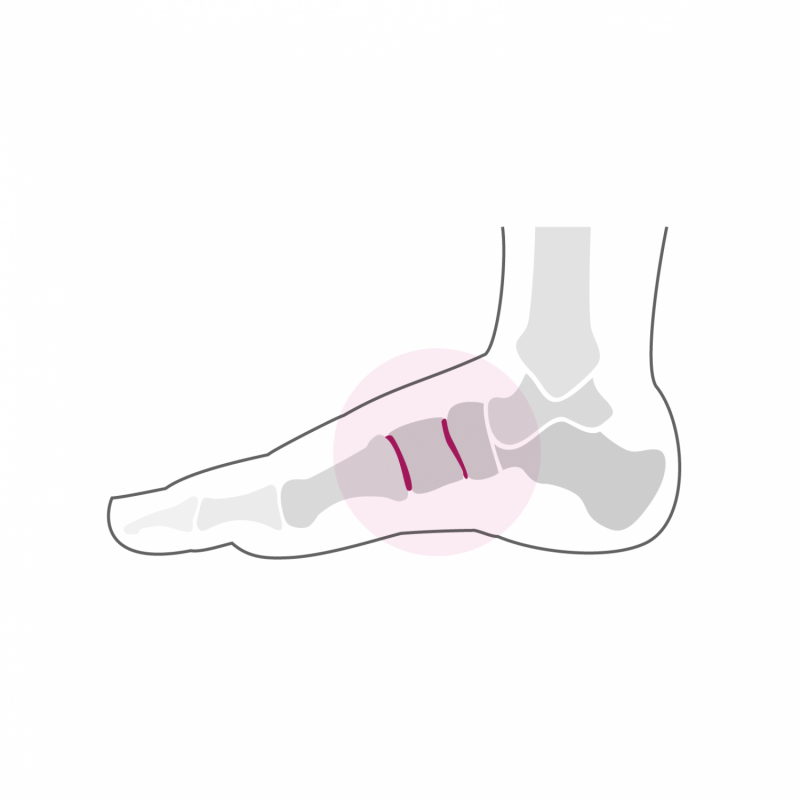 Osteoarthritis is a wear of the articular cartilage, a flexible structure of a few millimeters covering the surface of the bone and allowing the painless movement of the joint. Osteoarthritis can develop spontaneously without any specific cause - this is called primary osteoarthritis - and can also occur after trauma to the joint surface, as is the case following a fracture, this is called post-traumatic osteoarthritis. Even if the fracture is treated by an operation aimed at perfectly reconstructing the articular surfaces, osteoarthritis can appear later due to the primary trauma of the cartilage which is not able to regenerate spontaneously. The joints of the midfoot (Lisfranc joint) and the hindfoot (Chopart joint) are often the site of osteoarthritis which manifests itself firstly by pain on exertion, then typically resumes when walking in the morning or after a long sitting position. These pains are accompanied by a swelling of the affected joint which is caused by the formation of bony beaks on the edge of the joint, bony growths which cause painful irritation of the joint capsule. Unlike the ankle joint, the midfoot and hindfoot joints have very little mobility so that the loss of movement is hardly felt.

The diagnosis is made during the clinical examination and using a standard foot X-ray. A CT scan can also be performed to better assess the affected joints and the extent of osteoarthritis. The treatment is oriented according to the degree of joint damage and the intensity of the pain. A so-called anti-inflammatory treatment by applying ice or anti-inflammatory creams, as well as adapting shoes and putting on plantar supports can provide relief. It is also recommended that you stop certain activities that cause pain. Despite these initial measures, osteoarthritis tends to progress and the pain becomes more and more debilitating. Surgical treatment is then necessary and effective in most cases. In the midfoot and hindfoot joints, the treatment of choice is arthrodesis or blockage of the joint in the anatomical position. As these joints have a limited range of motion in the normal state, arthrodesis will have very little impact on the mobility of the foot, while the pain associated with osteoarthritis disappears after the joint is blocked.

During arthrodesis, the cartilage remaining on the articular surfaces is completely eliminated and the two bones are prepared in such a way that they can be fixed together in order to obtain a bony "bridge" at the joint. The arthrodesis is stabilized using screws or plates, most often made of titanium, material which does not necessarily have to be removed later. The intervention can last between one and two hours depending on the joints involved and can be performed under general or spinal anesthesia. It can be combined with local anesthesia of one of the main nerves of the foot (popliteal block), which significantly reduces post-operative pain. It takes one to two nights of hospitalization. Walking is done immediately from the first post-operative day in full discharge using canes in a removable plastered boot. This total discharge must be observed during the first two weeks. The removal of stitches and the making of a new removable plastered boot take place 2 weeks after the intervention. From this moment, a partial load of 15 to 20 kg on the operated foot is allowed, this for 4 additional weeks. A clinical and radiological check-up is carried out 6 weeks after the operation.

If there is sufficient bone healing, a progressive increase in the load on the foot is done using a rigid sole shoe over two to three weeks until the total load. From the 7th week, a physiotherapy treatment aimed at reducing the swelling of the foot and improving its function is implemented. Resumption of activities such as swimming, cycling or moderate walking is possible from the 10th post-operative week. More restrictive activities on the foot such as running or longer hikes can be considered from the 7th month after the intervention. The foot will continue to refine and soften until one year post-operatively and gradually regain its full function. A clinical and radiological check at 1-year post-operative allows a final assessment and to end the treatment.