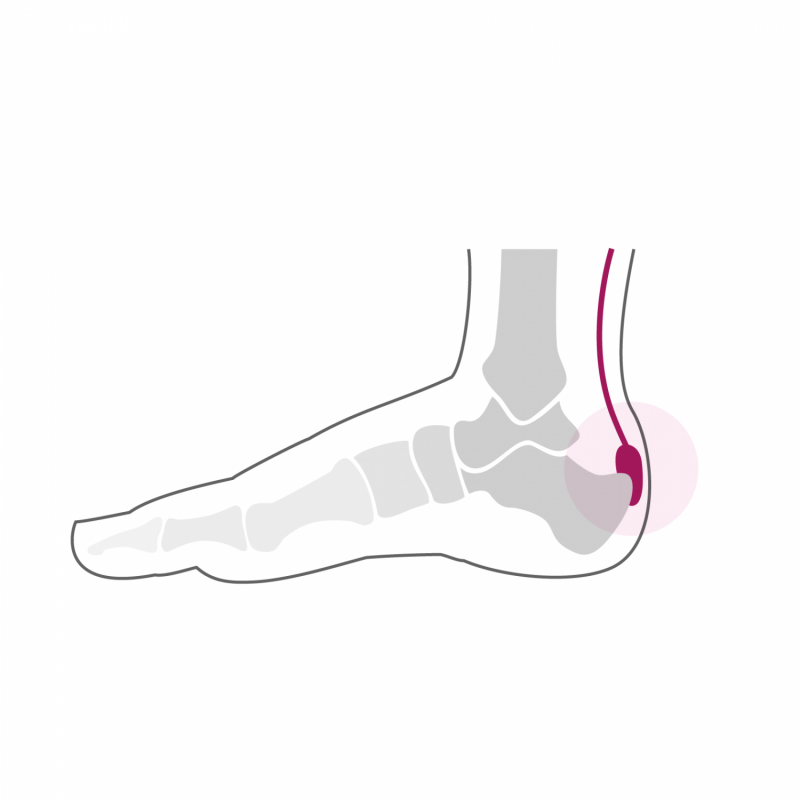 Haglund's disease is an inflammation of the hindfoot region located on the posterior edge of the heel. It is due to a particular morphology of the calcaneus which presents a bony prominence also called exostosis. This exostosis puts increased pressure on certain structures such as the retro-Achilles or subcutaneous bursa. This chronic inflammation causes thickening of these structures, which further accentuates the impression of "bump" on the back of the heel. This bone growth can also cause increased pressure on the Achilles tendon, even causing partial tearing. In rare cases, there is also ossification inside the tendon which further increases pressure and pain. Symptoms are manifested mainly on exertion in the form of sharp pains on the back of the heel which often prevent continuing activities.

The diagnosis is made by clinical examination and confirmed by an x-ray of the hindfoot. We then observe the particular shape of the posterior edge of the calcaneus and possible ossifications of the area of ​​insertion of the Achilles tendon.

The treatment is initially conservative and consists of the adaptation of shoes and anti-inflammatory measures in the form of physiotherapy and local application of ice and an anti-inflammatory cream. It also involves reducing the loads on the inflamed area by reducing or modifying your sports activities. In case of improvement and reduction of pain, a gradual resumption of activities is recommended to avoid further overload and inflammation.

Surgical treatment is indicated if conservative treatment fails. Depending on the morphology of the calcaneus, it ranges from simple resection of the bony growth to an osteotomy to correct the shape of the calcaneus with or without associated excision of intra-tendon ossification. In the case of resection of Haglund's exostosis, the procedure takes approx. 30 minutes and can be performed under general or spinal anesthesia. It can be combined with local anesthesia of one of the main nerves of the foot (popliteal block), which significantly reduces post-operative pain. We recommend an overnight stay because of post-operative pain and the risk of hematomas. Walking is done immediately from the first post-operative day in partial load of 15 to 20 kg on the foot operated with crutches for a period of two weeks. The fitting of a plastered boot is not necessary. The stitches removed 2 weeks after the operation. From this moment, a total load on the operated foot is allowed. A clinical and radiological check-up is carried out 6 weeks after the operation.

In the presence of an increased angle of the posterior calcaneal tuberosity and in case of associated intra-tendinous ossification, simple resection of the exostosis is insufficient, and it is possible to perform a so-called "V" osteotomy of the calcaneus. It is a cut in the bone to reduce the posterior angle of the calcaneus in order to decrease the pressure there. The osteotomy is fixed with special titanium clips that can be left in place. In case of associated intra-tendon ossification, it can be excised by a longitudinal incision in the Achilles tendon. It is sutured and healed at the same time as the osteotomy is healed. The operation lasts between 60 and 90 minutes and can be performed under general or spinal anesthesia. It can be combined with local anesthesia of one of the main nerves of the foot (popliteal block), which significantly reduces post-operative pain. It takes two nights of hospitalization. Walking is done immediately from the first post-operative day in full discharge of the foot operated using crutches in a removable plastered boot. This total discharge must be observed during the first two weeks. The removal of stiches and the making of a new removable plastered boot take place 2 weeks after the intervention. From this moment, a partial load of 15 to 20 kg on the operated foot is allowed, this for 4 additional weeks. A clinical and radiological check-up is carried out 6 weeks after the operation.

At this stage, bone and tendon healing is sufficient and allows a gradual increase in the load over a period of two to three weeks until the total load. From the 7th week, a physiotherapy treatment aimed at reducing the swelling of the foot and improving its function is implemented. Resumption of activities such as swimming, cycling or moderate walking is possible as early as the 8th post-operative week. More demanding activities on the foot such as longer hikes or running can be considered from the 7th month after the intervention. Stop and go sports with repeated lateral movements and jumps are only resumed after one year. The foot will continue to refine and heal until one year post-operatively and gradually regain its full function.