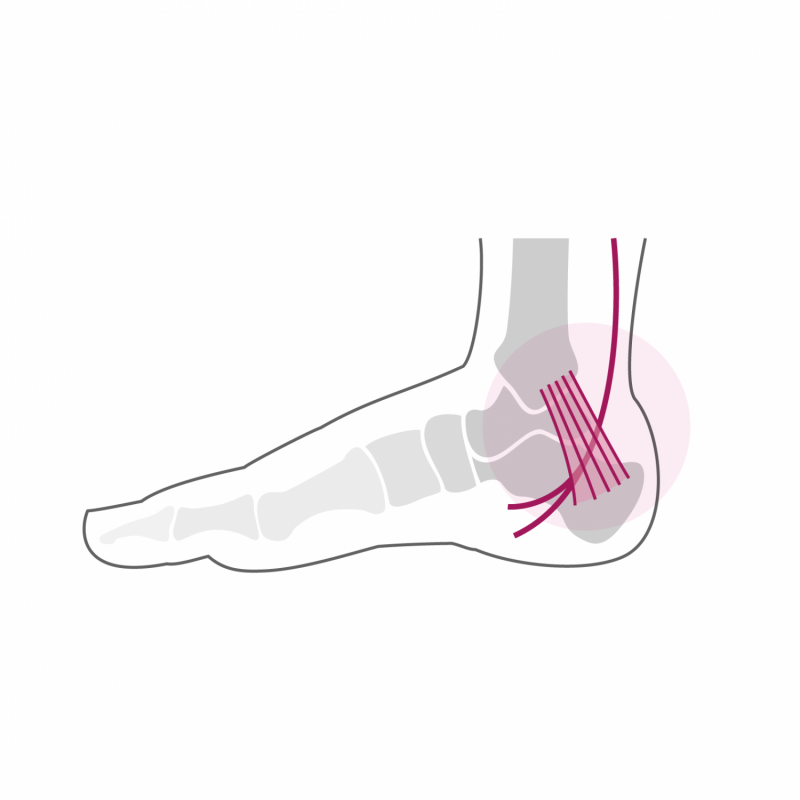 The tarsal tunnel is an anatomical region located between the internal malleolus and the calcaneus (heel bone). The tarsal tunnel is crossed by the tendon of the posterior leg muscle, by the long flexor tendons of the toes, by the tibial artery and the posterior tibial veins and by the tibial nerve. For anatomical reasons this tunnel can present variations which will increase the pressure on the structures which cross it and in particular the pressure on the tibial nerve. We are talking about compression syndrome. This is manifested by pain localized behind the internal malleolus as well as the appearance of neurological symptoms such as tingling, burning, tingling most often in the arch of the foot. These pains are increased by exertion and are typically also present at rest and even at night.

The diagnosis is made by clinical examination and can be confirmed by a neurological examination aimed at demonstrating damage to the tibial nerve. Complementary exams such as an MRI or ankle scan are sometimes necessary to better determine the anatomy of the tarsal tunnel.

The treatment is first of all conservative and aims to reduce the pressure on the nerve. In the case of an associated flat foot, wearing suitable plantar supports often provides relief by correcting the axis of the foot and thereby reducing the tension on the nerve.

If symptoms persist despite adequate conservative treatment, surgical decompression of the tarsal tunnel may be performed. It involves the releasing of the compression of the nerve by cutting a ligament located in the subcutaneous plane forming a kind of "roof" on the tarsal tunnel and which is sometimes enlarged (hard and hard tissue). This reduces the pressure on the tibial nerve which has a beneficial effect on pain.

The intervention lasts approx. 60 minutes and can be performed under general or spinal anesthesia. It can be combined with local anesthesia of one of the main nerves of the foot (popliteal block), which significantly reduces post-operative pain. It takes a night of hospitalization to ensure sufficient calmness in the foot after the intervention and thus reduce the risk of developing a postoperative hematoma. Walking is done immediately from the first post-operative day in partial load of 15 to 20 kg on the foot operated using crutches for a period of 2 weeks. A plastered asset is not necessary. The stitches are removed 2 weeks after the operation. From this moment, total load  can be exerted on the foot. A clinical check-up is carried out 6 weeks after the operation.

From the 7th week, a physiotherapy treatment aimed at reducing the swelling of the foot and improving its function is implemented. Resumption of activities such as swimming, cycling or moderate walking is possible as early as the 8th post-operative week. More restrictive activities on the foot such as longer hikes or running can be considered from the 4th month after the intervention. Stop and go sports with repeated lateral movements and jumps are only resumed after half a year. The foot will continue to refine and heal until one year post-operatively and gradually regain its full function.